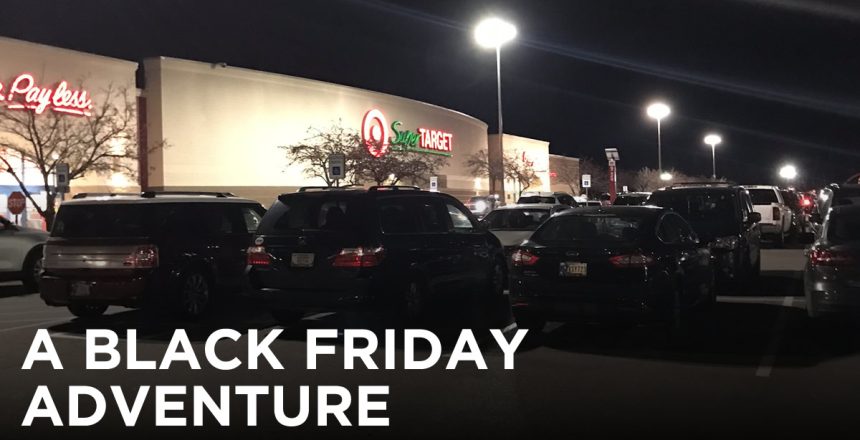 The one thing on my bucket list since high school has been to people-watch on Black Friday.

Determining where to go

Greetings, I’m Jeff Higgens – and if this is your first time venturing into my story adventures, welcome! I enjoy Target for a multitude of reasons, but Thanksgiving 2019 was THE YEAR I experienced The Black Friday Experience™.

Target Cashier (TC): I’m going to be here at 4pm on Thanksgiving, but it doesn’t really bother me.
Me: You open at 4pm on Thanksgiving?
TC: Oh, no – we open at 5pm, I get here at 4pm – then work until 1:30am, close down and then re-open on Friday.
Me: So, is it chaotic?
TC: It’s organized chaos. All these lanes will be open that day.
Me: Every lane will be open?
TC: Yes.

And with that, I was sold – Every lane will be open on Thanksgiving Day. In my mind, I was hearing “This is the perfect Kodak moment”

If you have know idea what Kodak is, wayyy back when, before digital cameras and phones, Kodak was a camera company and — well, it’s a long process to explain, but let’s just say a “Kodak moment” is a moment worth keeping. Yes, I know it’s probably weird I choose to take pictures of all the lanes open at Target while other people refer to ‘Kodak moments’ as moments spent with their spouse, kids, etc., but this is where I’m at in life.

I was expecting to go to Target more around 7 or 8pm, to let the long-line I envisioned that wrapped around the store to die down, but the events timed up so that I was walking toward the store at 5:03pm. I was surprised at how many spaces were available – and the lack of line there was to get into the store that just opened 3 minutes ago.

I feel like Target was expecting chaos, with barricades and police presence: 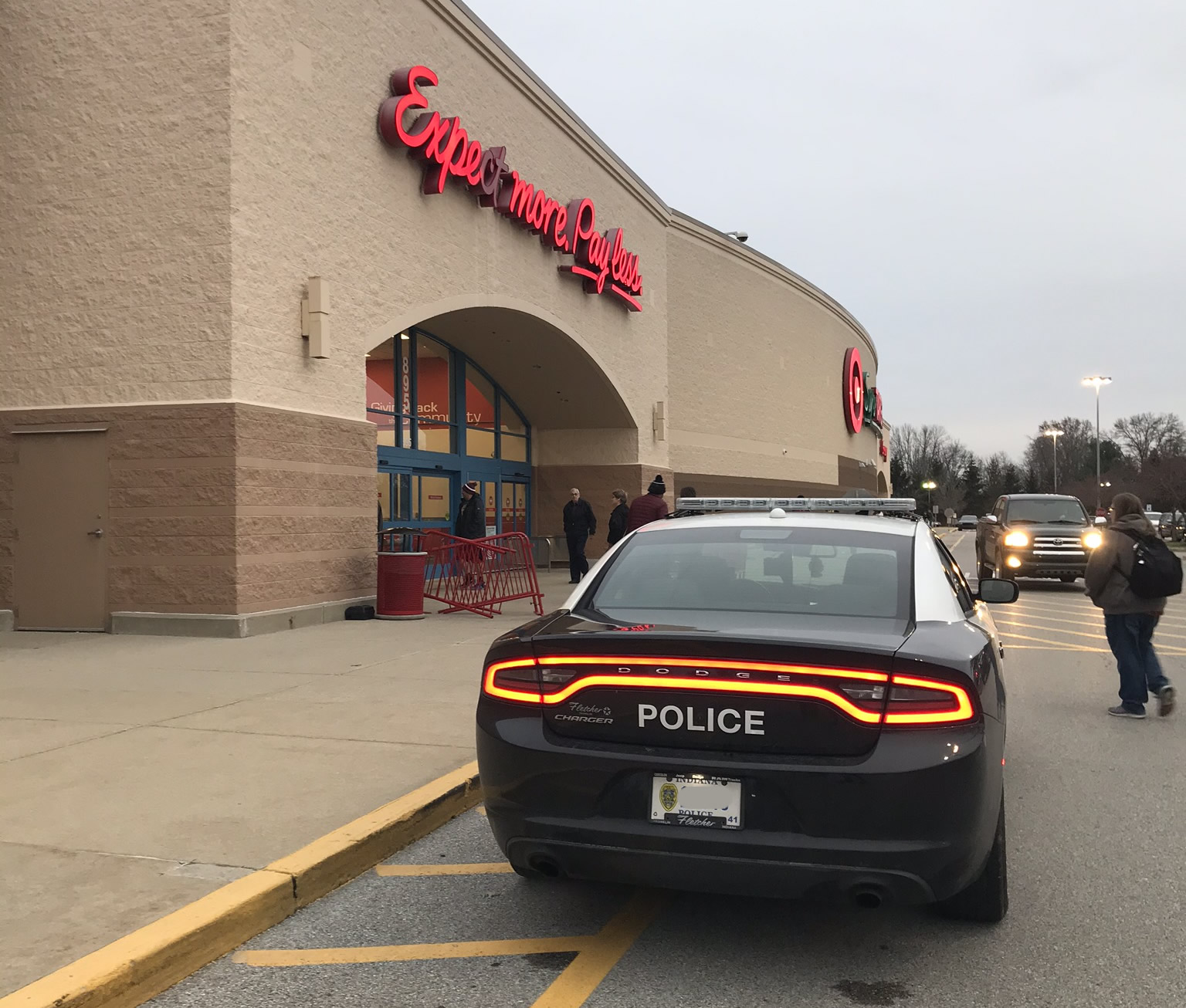 Upon entering, I hear the most common question,
“Where are the carts?”
“The worker at there said they were in here, but there’s none.”

Sure enough, there were no carts:

So, where were the carts? I heard a Target worker explain, “The carts are scattered around the store.”

Welcome to Black Friday – which now has games!

Game #1: Find the Carts: A Hidden Adventure Game
Game #2: Which section would you go for TVs? I’ll answer that question later. 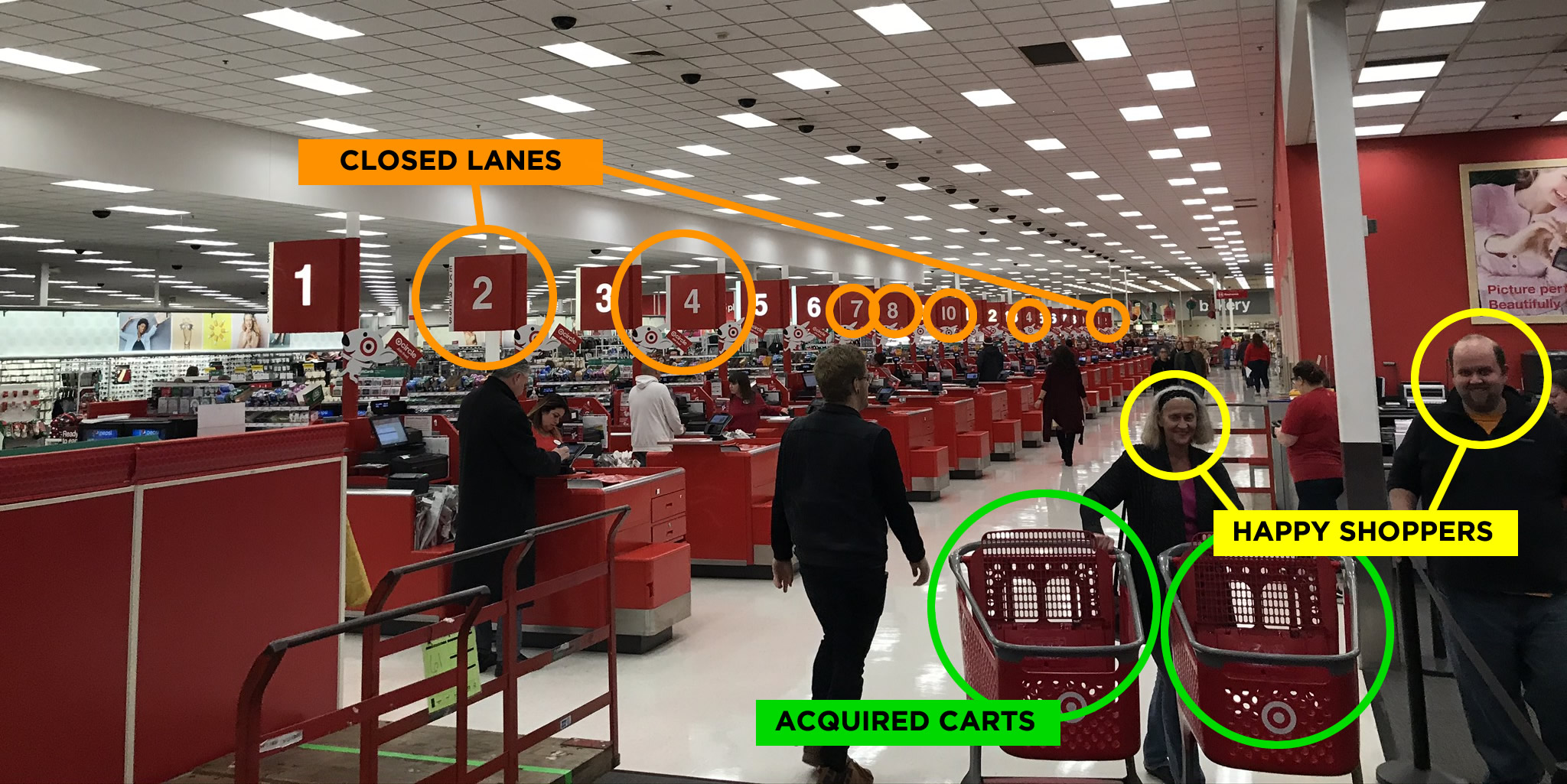 Did you see all those closed lanes? I counted about nine closed lanes. This is still the most lanes I’ve ever seen open at Target, but I wouldn’t consider this my “Kodak moment”.

This is Target – so I figured I’d venture and people watch (and maybe play the ‘find the cart’ game) while Target hopefully opens the rest of their registers.

Are you ready to find out where the TVs are? If you guessed the women’s apparel department, congrats, you guessed correctly! I mean, where else would you put the TVs? This and the Toy Department were the busiest sections of Target.

Oh, and if you’re looking for a Nintendo Switch, those were in the Men’s Apparel department. 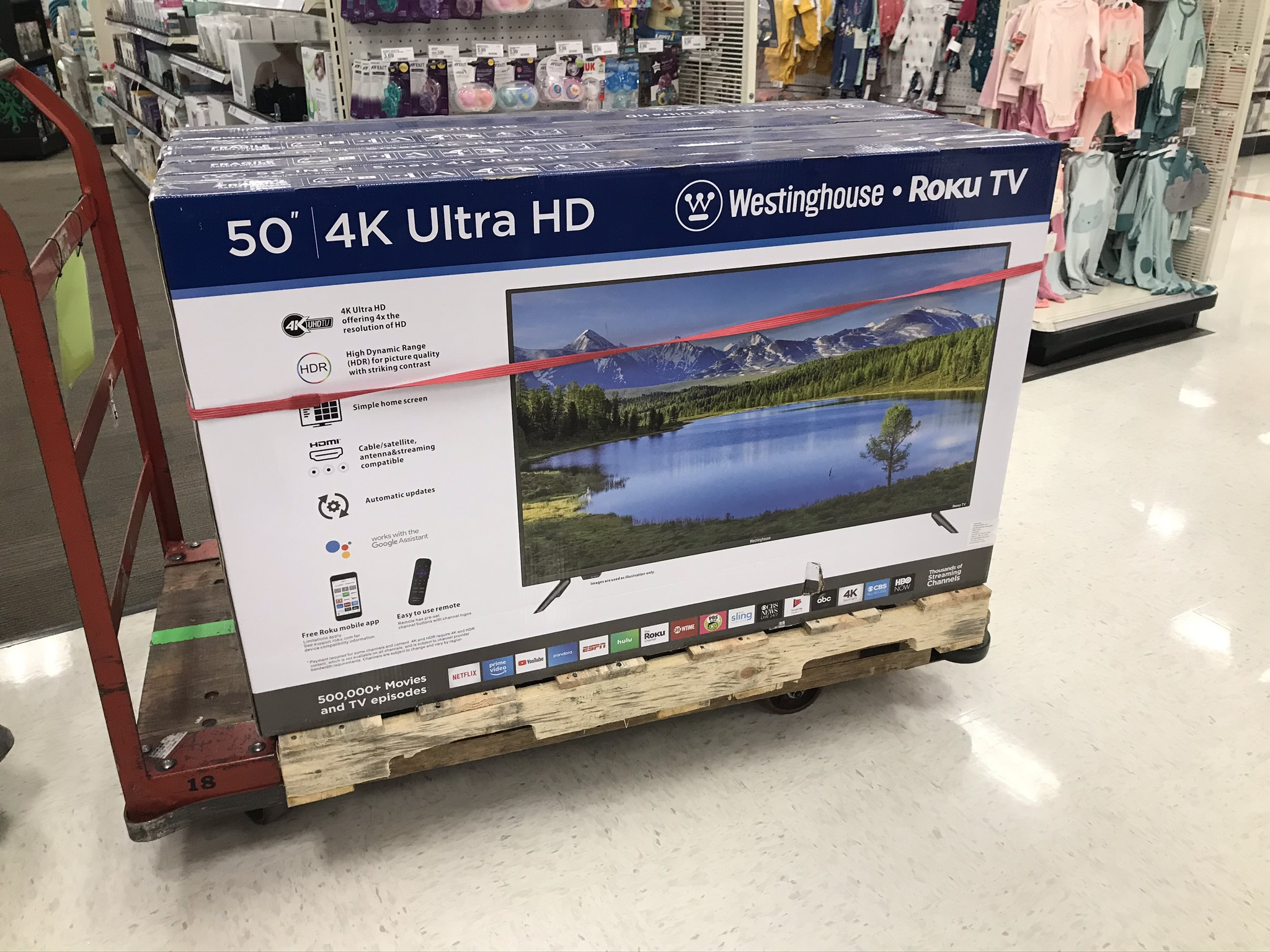 Remember all those carts? I found them! Here are just a few of the hiding spots for your enjoyment:

Well, that was fun! But let’s observe some more.

I ventured to Target with my sister, and periodically we’d hang out at the front of the store, looking to see the progress being made on opening all the lanes.

At times I felt like I was watching a race, being behind a rope, wanting to clap for the people with carts as they make their way to the finish line – the cashier register.

The best picture, though, goes to my sister. She sent me this with the accompanying text, “this guy looking for people to ring up”

I saw him later waiting, and upon seeing customers, he whispered “success” to himself after directing people down his lane. It’s always fun seeing people enjoy their job.

While I wait for the final few lanes to open, I walk around the store, observing the sights and sounds of a Target Black Friday.

Nearby I hear “Marco” and in the distance a “Polo” in response. A game is afoot. A customer adds commentary, “Is someone playing Marco Polo?”

I stumble upon a display of books for kids – I feel like somewhere along the way, someone did a study and concluded five-minutes was the optimal attention span for kids. My sister remarked, “Or the amount of time parents want to spend reading to their kids.” Maybe it’s the equilibrium of the two. 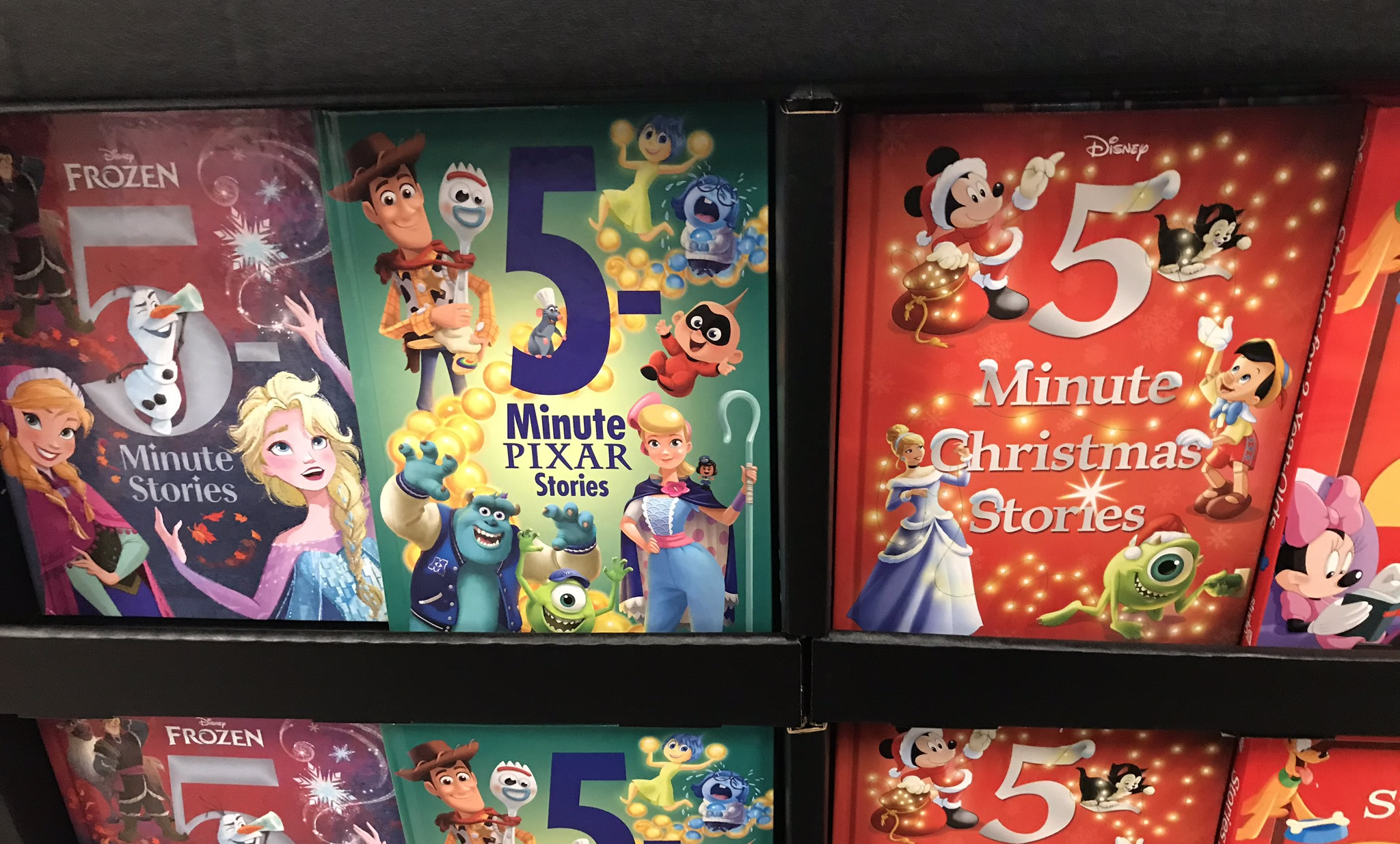 If you’re looking for the aisle with the most happenings, look no further than the linen aisle:

But now, back up to the front. I observed one worker direct a customer to the entrance of where you check-out (his left). He then talks to another worker, and then looks down to his right to where the customer is. He remarks, “Where’s she going? (looks to his left and back to his right) The opposite direction of where I told her to go. (starts walking towards her) That’s okay, she only has one item, we’ll take care of it”.

Not sure why I found it humorous, maybe it’s the fact he’s verbally saying what he’s thinking.

So, while we were at Target, my mom called my sister and wanted us to pick up some eggs – so I am now able to give an eyewitness-account to the in-line shopping experience at Target on Black Friday.

My sister gets the eggs and then stands in a line to get into the roped lane to find a cashier. Keep in mind, there’s plenty of open registers, so this is sadly very inefficient for Target. 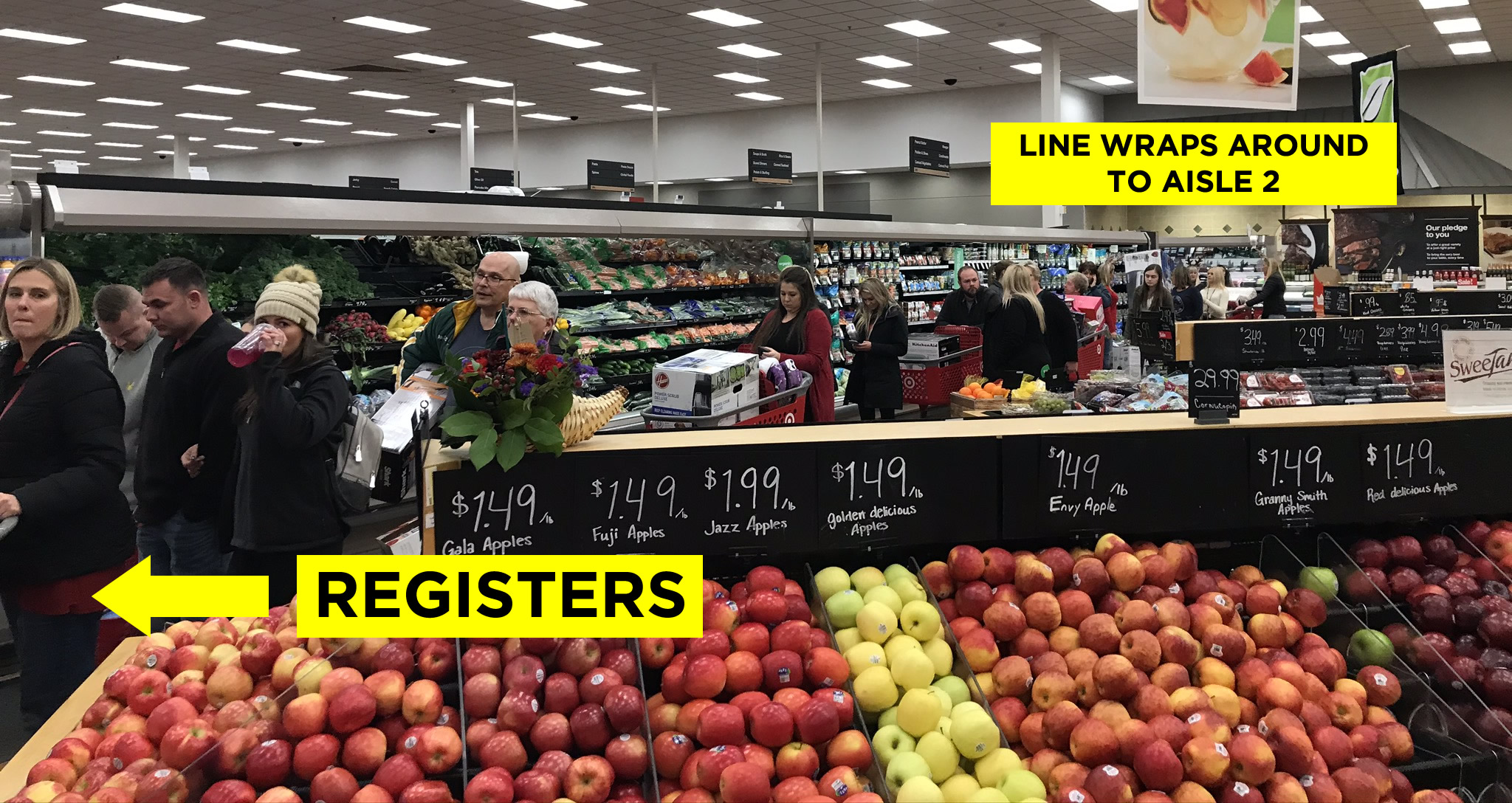 Upon seeing my sister with just eggs, the worker told her “Oh, you just came here for eggs? I’m so sorry.”

They probably would be sad to realize this was my only reason for heading into Target this evening.

But without further ado, here are the photos from two angles.

🎶 Target lanes with their lights all aglow  🎶 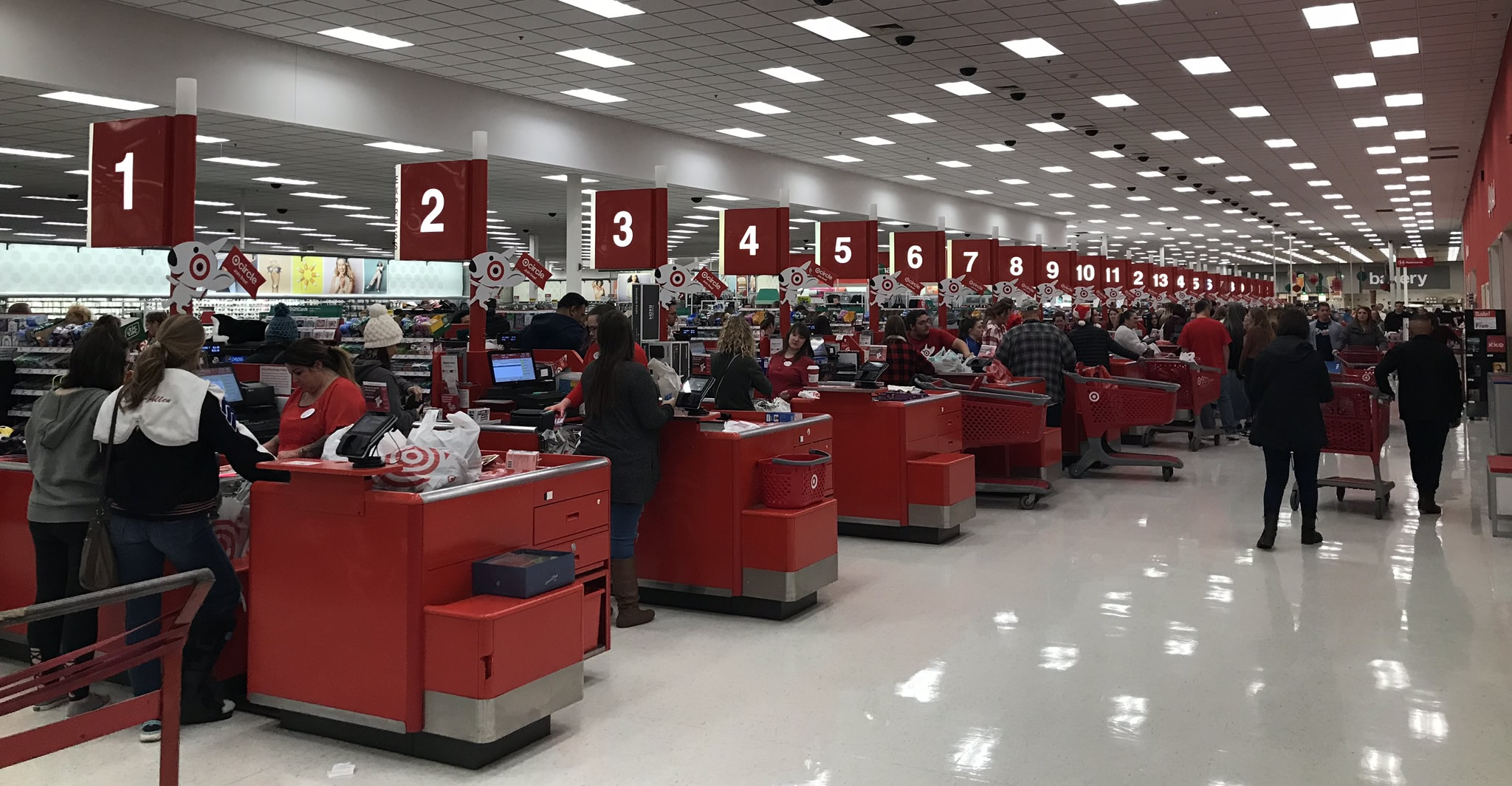 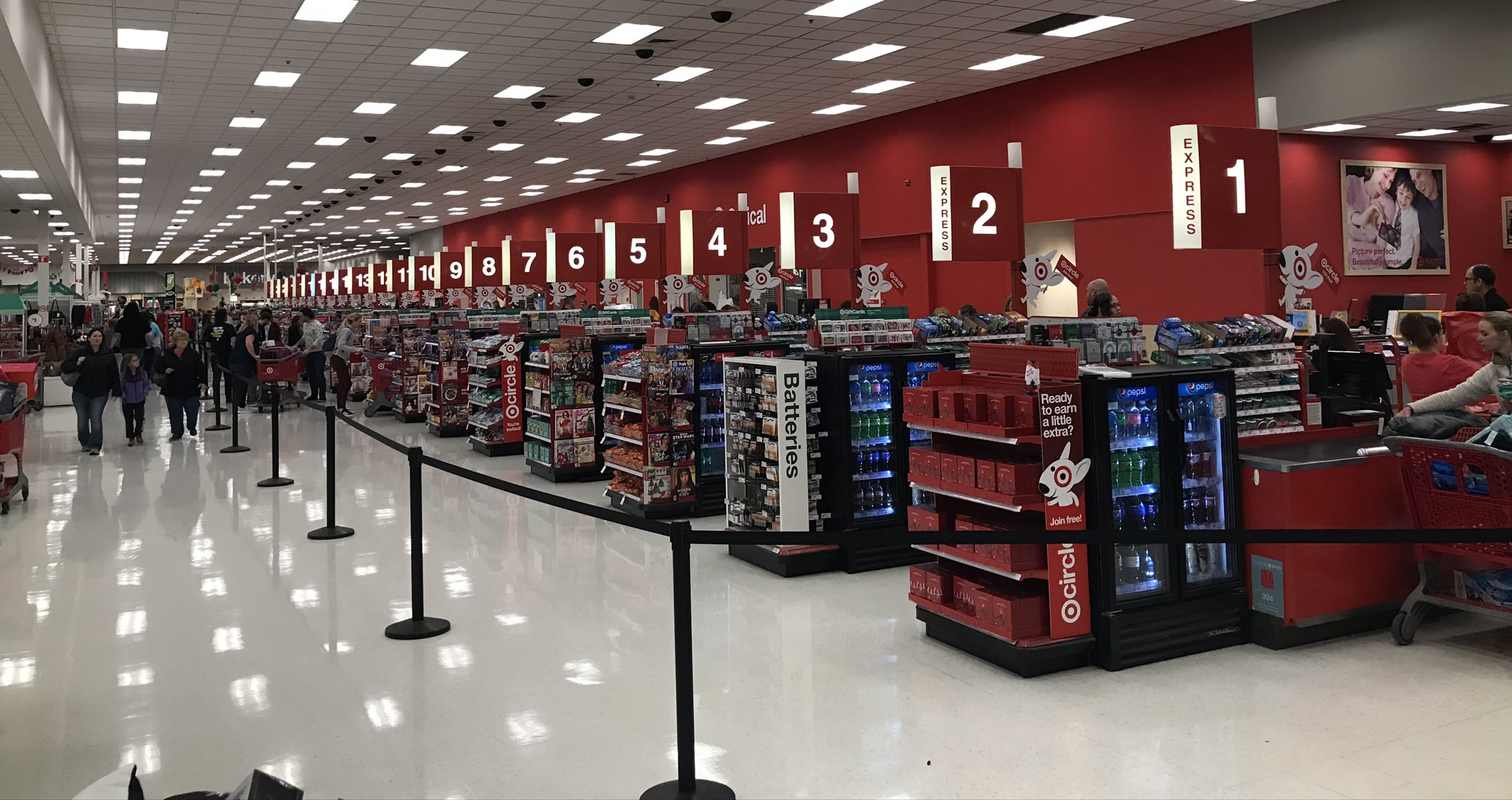 As we exited the parking lot, I noticed a weird thing – there was plenty of parking, but people tend to be in such a rush they were willing to park really far out. 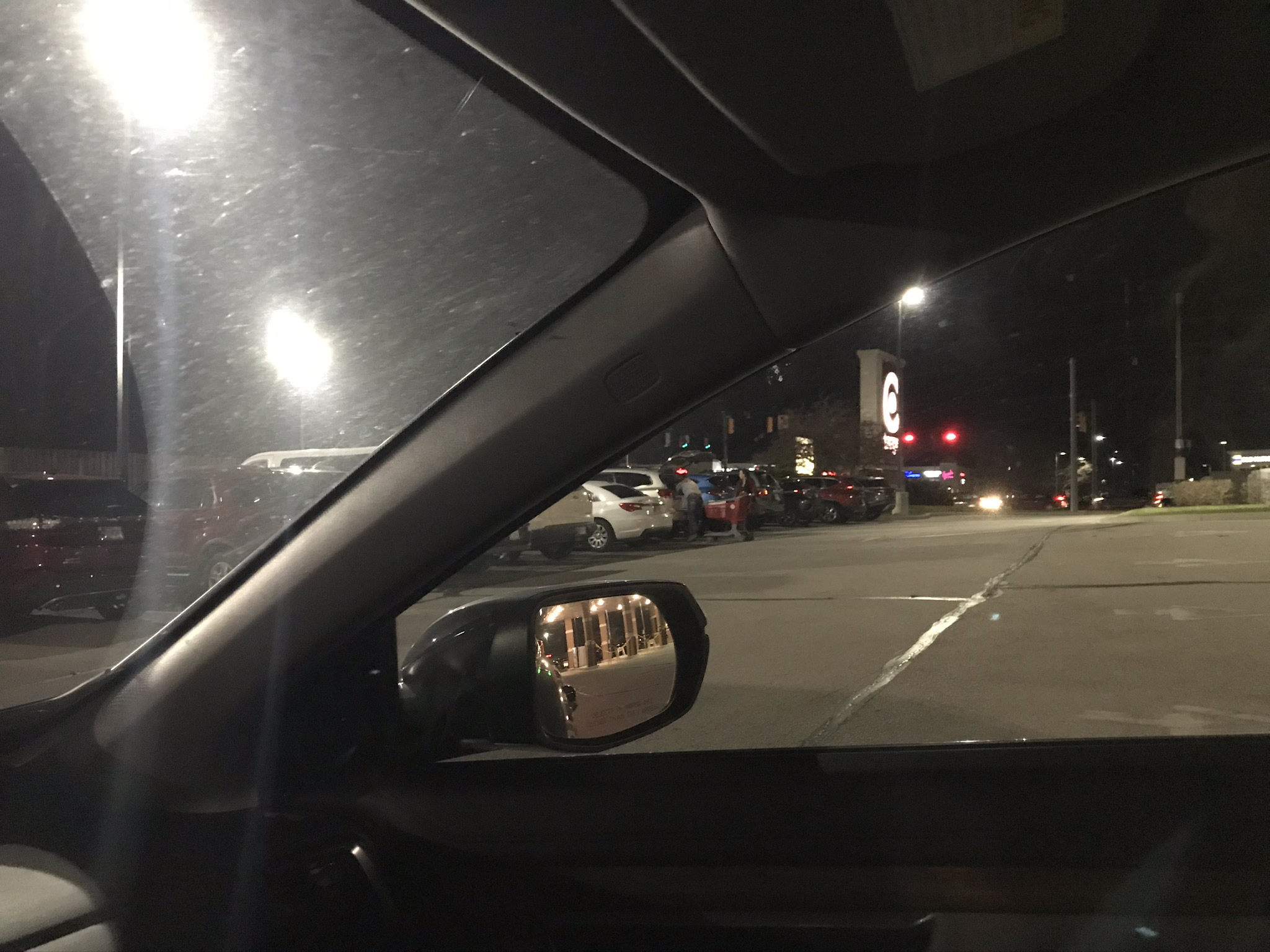 Even the BACK parking in front of the store is closer (marked in blue). Here’s a map for illustrative purposes: 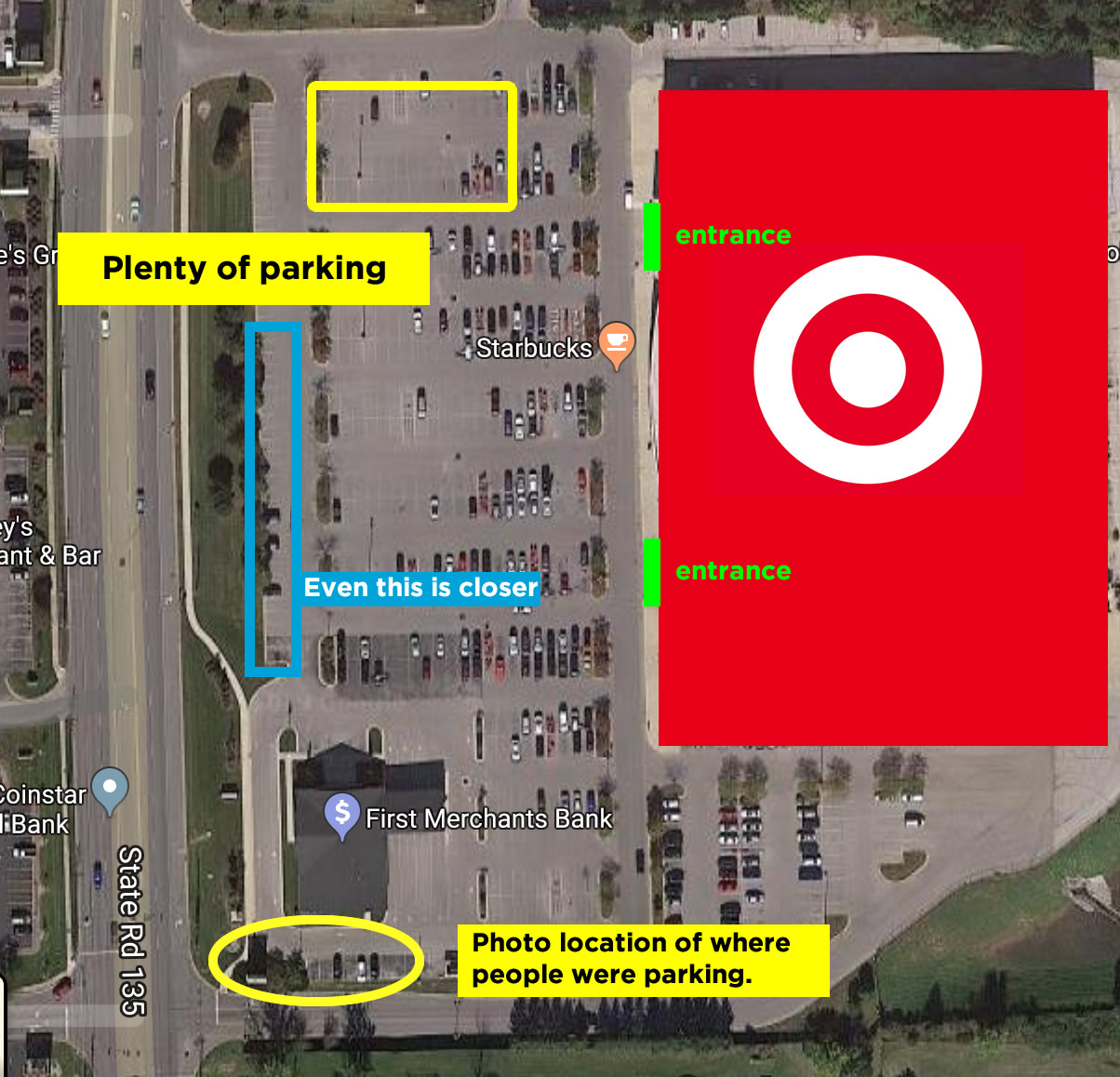 So, when you shop on Black Friday, sometimes patience can minimize walking time – unless Black Friday is a part of some cool exercising program where you’re getting as many steps in as possible…so for that, I say, “as you were…”

Full disclosure: lane #22 never opened. I went back later that evening to see if it would ever fully open, but I didn’t get my hopes up since my sister overheard they were already planning to send people home earlier than expected.

It sadly never did open. I also realized they decided to make the lines more efficient by removing the barrier – but sadly I could no longer cheer people on as they made their way past me.

Hopefully everyone had a great Thanksgiving and a fun Black Friday, no matter how you spent it.